The Chess Mysteries of Sherlock Holmes 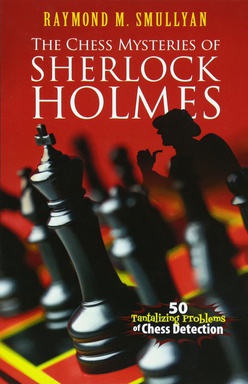 Join the master sleuth as he and Dr. Watson examine interrupted chess matches at clubs and country homes, examining the pieces' current positions to identify previous moves. Rather than predicting the outcome of these games, the Baker Street duo focus on past events, using the same variety of logical reasoning that unlocks the secrets to their ever-popular mysteries. Holmes instructs Watson (and us) in the intricacies of retrograde analysis in order to deduce on which square the white queen was captured, whether a pawn has been promoted, and which piece has been replaced by a coin. The mysteries grow increasingly complex, culminating in a double murder perpetrated by the devious Professor Moriarty.

Philosopher and logician Raymond Smullyan brilliantly recaptures the mood of Sir Arthur Conan Doyle's tales. Readers need only a knowledge of how the pieces move; the first puzzles explain all of the concepts that arise later on. These witty and challenging problems will captivate chess aficionados, puzzle enthusiasts, Sherlock Holmes fans, and everyone who relishes mysteries, crime stories, and tales of detection.